After crossing paths at Maastricht University in the Netherlands, Han and Sophie instantly clicked due to the passion and enthusiasm they had for art and tattoos. 2 years later, together, the college mates founded allabouttattoo.com.

Prior to running their own tattoo parlour, Han Parker was pursuing a degree in International Business. While he did enjoy learning about how different countries produce and exchange goods and services, he wasn’t fond of working a desk job all his life and wanted to do something that would allow him to explore his creative side. During his second last semester at Maastricht, he was even battling against depression and wanted to drop out before collecting degree, but then came Sophie like a breath of fresh air! 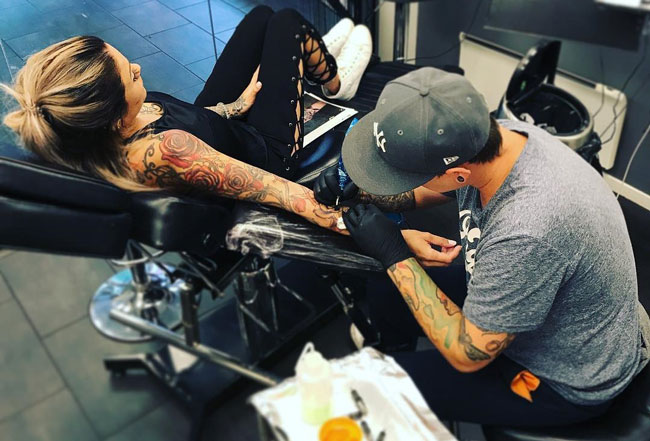 While the pair never met before 2018, Sophie and Han both joined Maastricht around the same time. Unlike Han, Sophie pursued a degree in something that she adored; Fine Arts. Her passion for art started at 8 when she joined an art school through the guidance of her parents. Although she was an introvert and hardly ever made any small talk with the instructor and the other students, the patterns she drew around that time were beyond lively.

Han chose not to drop out and collected his degree in International Business the following year. Despite deferring for a semester, Sophie graduated with a degree in Fine Arts in spring of 2019.

After finishing their undergrads, Han chose to follow his dreams and gave into the thought of collaborating with Sophie to open their own tattoo business. They spent the next few months taking crash courses on tattooing. While Sophie found more enjoyment in Black and Grey tattoos, Han was more fascinated with unique patterns and bursts of vibrant colours. 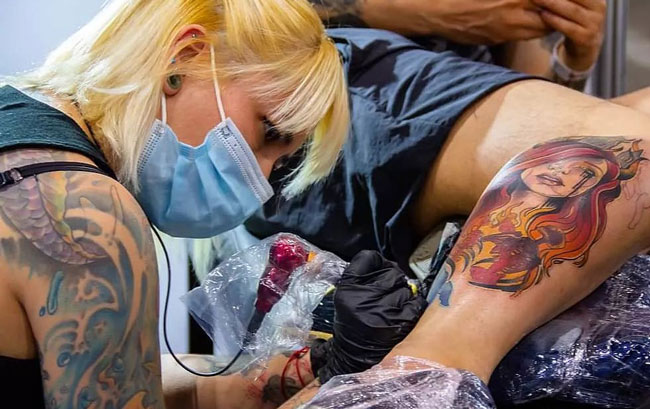 In February 2020, after gaining a fair amount of knowledge, Sophie and Han finally gained enough courage to kick start their business. In addition to coming up with the branding and packaging, they even invested in a mini studio in Villapark to seal the deal. Although their dreams were within their grasp, things came crashing down when COVID-19 took the world by storm and the whole world entered a global lockdown.

Even though both Sophie and Han were in despair due to the pandemic, they utilised the time by focusing on their craft when being cooped up in their apartments. To keep their hopes and dreams afloat, they opened allabouttattoo.com; a platform on which they provide their clients as well as readers information about tattoos that are on the trend, provide instructions to novice tattoo artists, and publish useful articles regarding tattoo aftercare to this day.

In addition to creating tattoos and being content creators, Han and Sophie are also tattoo consultants. They provide free advice on question and answer platforms like Quora, but also host online and face to face sessions where they advise users on ideal placements, practical designs, and provide them an accurate time frame for their tattoos.

All About Tattoo is operated and run by Han Parker and Sophie Bush. Prior to becoming business partners and tattoo artists, Han and Sophie were college mates. While the two are polar opposites on most occasions, the fondness they have towards tattooing and art is what keeps their chemistry in check, and made them friends in the first place!

If you’d like to learn more about the co-authors and co-founders of All About Tattoo, make sure to move onto the following segment! 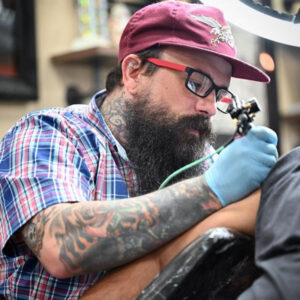 Han Parker is the co-founder of All About Tattoo. He was born in Iwate, Japan, and originally resided in Oshu. Since Han is an army brat, he and his family moved frequently when he was younger. After his father retired from the military, the Parkers’ moved to Hamburg, Germany.

Han enrolled at the International School of Hamburg to pursue his secondary education. Although he lacked the knowledge of what he wanted to be in the future, he knew that he didn’t want to be too far from his then-home, Hamburg, so he applied to the University of Maastricht to finish his undergrad.

Since Parker didn’t have a background in art, being a tattoo artist isn’t necessarily the easiest task. However, the drive he has for art can only be found in the hearts of real artists, and is one of the very few attributes that keeps the passion he has for his profession active!

Sophie Bush is the other half of All About Tattoo. She’s a California girl who is a go-getter and loves being under the sun. After graduating from high school, she was given an ultimatum to either work in real estate or follow her life-long hobby. She ultimately chose the latter and pursued a degree in Fine Arts.

Despite being rather new as a tattoo artist, the talent she has with a needle is incredible. She often finds enjoyment in creating black and grey tattoos, but also loves creating portraiture tattoos. Taking into account the love she has for art overall, Sophie hopes to stay loyal to this field of work until eternity.